52 photos
The Musée d’Orsay, the home of France’s national collection from the impressionist, postimpressionist and art nouveau movements spanning the 1840s to 1914 is in the former Gare d’Orsay railway station – itself an art nouveau showpiece.
The Tuileries Gardens get their name from the tile factories which previously stood on the site where Queen Catherine de Medici built the Palais des Tuileries in 1564. They were re-landscaped in 1664 to give them their current French formal garden style. The gardens separate the Louvre from the Place de la Concorde, and are a cultural walking place for Parisians and tourists where Maillol statues stand alongside those of Rodin or Giacometti.
The Orangerie was originally built in 1852 to shelter the orange trees of the garden of the Tuileries. It is now an art gallery of impressionist and post-impressionist paintings located in the west corner of the Tuileries Gardens next to the Place de la Concorde. It is most famous for being the permanent home for eight Water Lilies murals by Claude Monet.
Eugène Delacroix spent the last years of his life (from 1857 to 1863) in this apartment in the heart of Paris, to be nearer the church of Saint Sulpice where he was in charge of the decoration of a chapel.
Construction of Saint Sulpice began in 1646 and it is one of the largest churches in Paris. During the Revolution, the Church was damaged and turned into a Temple of Victory. It was restored and redecorated in the 19th century with the help of Eugène Delacroix.

Pierre Louis Rouillard Cheval à la Herse outside the Musée d'Orsay. When commissioned it was intended as decoration for the Trocadéro palace. The spiky thing underneath is a horse harrow. 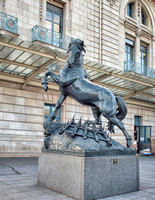 Jim outside the Musée d'Orsay which we planned to see first but the horrible line is due to a "wildcat" short term strike of French public administrative staff.

Thomas Jefferson statue erected on July 4, 2006 next to the Pont Solferino, which is a relatively new foot bridge over the River Seine near the Musée d'Orsay. 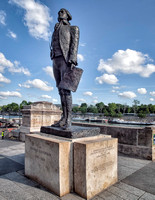 Jim in the Tuileries Gardens. In France what are called "gardens" are so often just trees or pruned bushes. 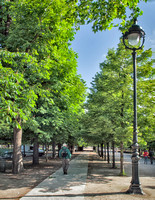 Looking west from the Tuileries Gardens toward the Place de la Concorde with the Obelisk of Luxor in the center distance.

Nicolas Coustou statue of Julius Caesar in the Tuileries Gardens. 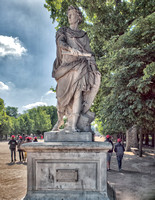 Looking west from the entrance to the Tuileries Gardens at the Place de la Concorde with the Obelisk of Luxor in the center distance and Jim on the right in green jacket.

Close up of the Obelisk of Luxor in the Place de la Concorde. 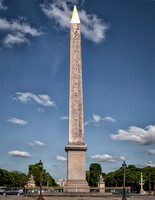 Mercury riding the horse Pegasus, (1699) by Antoine Coysevox (1640-1720) at the west entrance of the Tuileries Gardens. Originally in the estate of Louis XIV at Marly, moved to the Tuileries in 1719. 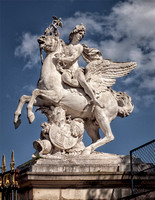 The statue of Renommée, or the fame of the king, riding the horse Pegasus, (1699) by Antoine Coysevox (1640-1720) at the west entrance of the Tuileries Gardens. Originally in the estate of Louis XIV. 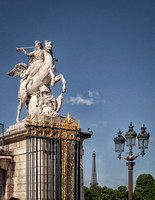 Flowers in the Tuileries Gardens!

Eiffel Tower as seen from the west entrance to the Tuileries Gardens.

A small portion of a 2 room mural of water lilies (Les Nymphéas) by Claude Monet at the Musée de l'Orangerie in the Tuileries Gardens. Best we could do as photography was somewhat discouraged. 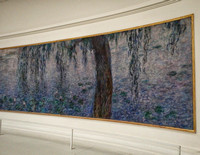 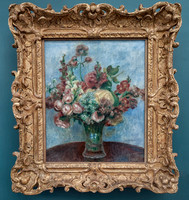 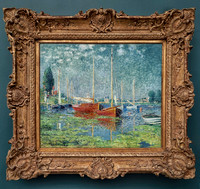 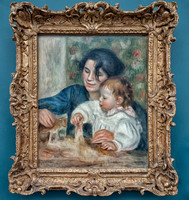 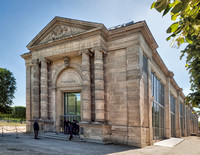