59 photos
The Versailles Palace, an Official UNESCO World Heritage Site, is a sprawling château with landscaped grounds and formal gardens. Thirteen miles southwest of Paris, it was the political capital of France from 1682 to 1789 and the opulent residence of French kings. Louis XIV, known as the Sun King, was the monarch of France from 1643 until 1715. In 1661, he moved the royal court to Versailles, which had previously functioned as a hunting lodge. He commissioned a palace and garden that would impress the world and display his power. It has over 700 rooms filled with fine furniture and paintings, tapestries and sculptures by French and Italian masters. The Hall of Mirrors includes 17 arched windows paired with 17 alternating mirrors, crystal chandeliers, marble columns and gilding.
Marie-Antoinette is the only queen to have imposed her personal taste on Versailles. Brushing aside the old court and its traditions, she insisted on living as she wished. In her Petit Trianon domain, which Louis XVI gave her in 1774, she found privacy that enabled her to escape from the rigours of court etiquette. No one could go there without her invitation.
Behind the Petit Trianon is her hamlet, created in the style of a miniature Norman village. It contained the farm, twelve thatched cottages, a dovecote, mill and tower, all of which Marie Antoinette had built in 1783 by her favourite architect, Richard Mique and landscape gardener, Andre Le Notre.
A farmer was appointed by Marie Antoinette to manage the farm, so that its vegetable gardens, fields, orchards and vineyards supplied produce to the palace kitchens. She loved the simplicity of country life and wanted to indulge in it. She also wanted the farm to help create the illusion that the Petit Trianon was in the countryside.
It is well worth the long walk it takes to get there!!
It was from Versailles that Marie-Antoinette and Louis XVI were taken and then held captive in the Tuilleries Palace in Paris. It was a fortress prison from where Louis was taken to be guillotined in 1793. Marie-Antoinette was then imprisoned in the Conciergerie from where she was taken to be guillotined, also in 1793.

Layout of the Palace and Gardens at Versailles. 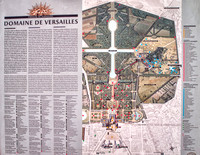 Statue at the main entrance by François Girardon of Victory Over Spain by Louis XIV ca. 1668. 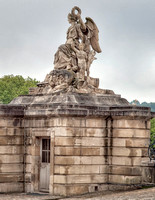 Detail of the gate at the entrance to the Palace.

North of the golden fence at entrance to Château is a product of Louis XIV's fourth (last) building campaign (1699–1710), the fifth and final chapel - the "rounded end" building in the center.

Detail of the fifth and final chapel at the Château of Versailles.

Panorama of the entrance to the Palace of Versailles.

One of many many ornate doors at the Palace.

Sun and lamplight illumine statuary of royalty in a long arched corridor. Palace of Versailles. 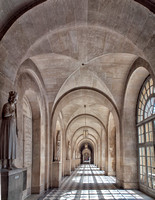 Portrait of the Royal Family ca 1782. Marie Antoinette holds the dauphin, Louis Joseph, her husband, Louis XVI gazes into her eyes. The royal couple are surrounded by the king's brothers. 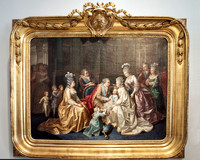 On the right are images of various past features of the gardens which seem to have been under rather constant reworking. 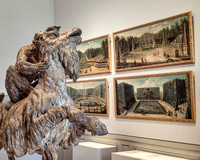 These lead monkeys on horses are part of a series created for the “labyrinth”, laid out in 1672-1673, in the southern part of the gardens for the children. It was dedicated to Aesop's Fables.

Marie Antoinette with her two eldest children, Marie-Thérèse Charlotte and the Dauphin Louis Joseph, in the Petit Trianon's gardens, by Adolf Ulrik Wertmüller (1785). 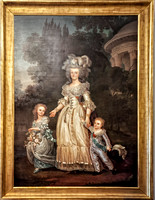 This statuette is a reduced version of the statue of Louis XIV placed in the courtyard by Louis-Philippe. The full size statue dating to ca. 1830 is now in the Place d'Armes. Ornate ceiling detail in the Palace of Versailles. 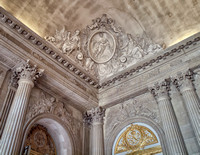 Interior of the Royal Chapel at the Palace of Versailles. This is the view from the second floor. The period organ case made by Philippe Bertrand (designed by Robert de Cotte) dates from 1710. 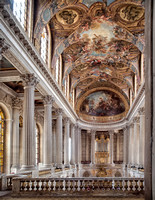 Ceiling of the Hercules salon. The painting shows Hercules being received into the company of the Olympian gods.

The ceiling of the Venus room, “Venus Crowned by the Graces” by René-Antoine Houasse 1672. 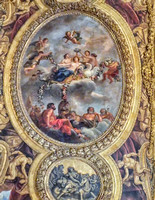 In the Venus room a statue of Louis XIV dressed as a gladiator by Jean Warin 1671. 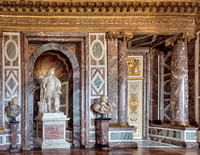 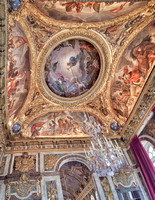