Home»All Photographs»Iona, Scotland and Ireland August-September 2015»Ruined Nunnery on Iona and the Island of Staffa

34 photos
Unlike the rest of the Abbey buildings, the nunnery on Iona has not been restored since being damaged during the Reformation. The pink granite walls that remain, despite being ruined, are amongst the best examples of a medieval nunnery left in Britain.
Staffa, an entirely volcanic island, is probably best known for its unique geological features such as the many caves and the unique shape of the basalt columns which are also found in the Giant’s Causeway and Rathlin island in Northern Ireland and closer by on the island of Ulva. The island, small as it is with only 33 hectares, was once inhabited in the 1700s by as much as 16 people but nowadays seabirds and tourists have taken over their place.
Felix Mendelson visited Iona and Staffa in the summer of 1829, which resulted in his two best-loved works, the Overture The Hebrides and the Symphony No 3 in A minor (Scottish).

Nunnery on Iona which was active from ca. 1,200 to 1,550 AD looking from the Refectory toward the standing gable end of the Nunnery Church.

Possible Sheela na gig in the south wall of the ruined nunnery. The arches of the Nunnery Church are visible to the north thru the opening.

Looking southwest at the south end of ruins of the Nunnery In the center is one gable end of the Refectory where the nuns ate and to the right of that are the remains of the Chapter House.

Nice house on the main street of Iona.

Looking northnortheast along the coast of Iona from the ferry landing; Iona Abbey is visible at the left edge of this image.

The boat that took us from Iona to Staffa to see Fingal's Cave. 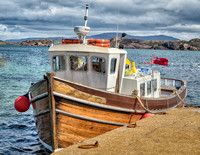 The ferry arriving at Iona.

View of the Iona Abbey with Dun I in the background from the boat on the way to Staffa.

Panorama of the east coast of Iona taken from the boat on the way to Staffa. Iona Abbey is visible a bit right of center and Dun I is further to the right.

Cormorants on a small island just off Mull on the west side of the Bullhole where the Iona/Fionnphort ferry ties up at night. We went thru the Bullhole on the way from Iona to Staffa.

Interesting rocks and color on a small island just off Mull on the west side of the Bullhole where the Iona/Fionnphort ferry ties up at night.

Northeast beach of Iona seen from boat on the way from Iona to Staffa.

West coast of Mull as seen from just north of the Bullhole on the way from Iona to Staffa. We turned just past the point in the foreground to view harbor seals.

Harbor seals seen from boat on way from Iona to Staffa.

Harbor seal seen from boat on way from Iona to Staffa. 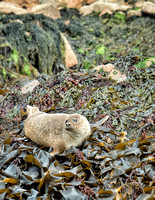 Approaching Staffa from the south.

View of the south side of Staffa with Fingal's Cave on the right and Boat Cave on the left.

The ride from Iona to Staffa and back was a bit rough (windy and seas cal 2"+) . 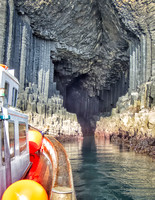