25 photos
The Sacré-Cœur Basilica is located on Montmartre, the "Mount of Martyrs". It is the highest point in Paris, and has been a place of worship from the Druids of ancient Gaul, through the Romans with their temples dedicated to Mars and Mercury, to the earliest Christian churches. Construction on the current building began in 1875 and was finished in 1914. It was consecrated in 1919 after the end of World War I.
The Musée Carnavalet came about under the Second Empire, when a large part of the historic heart of Paris was being demolished. Paris still had many cramped, unhealthy Medieval areas. Baron Georges-Eugene Haussmann was chosen by Napoleon III to lead a renewal project, creating new roads, public parks, public monuments, as well as installing new sewers and changing the architectural façade of the city. The Musée contains around 600,000 exhibits spread over more than one hundred rooms, and houses the largest overall number of collections in the city of Paris. There are a wide variety of exhibits: from archaeological remains to views of Paris in bygone days, scale models of ancient monuments, street signs, decorative elements from buildings which have vanished, historical or anecdotal scenes, portraits of prominent Parisians, mementos of famous men or depictions of everyday life, as well as a unique collection devoted to the revolutionary period. It is off the regular tourist routes and is well worth the time and effort to visit!
The history of the Place des Vosges goes back to 1604 when King Henry IV built a Royal pavilion at the southern end of the square. The King ordered all 35 other buildings bordering the square to follow the same design. The result, an early example of urban planning, is a symmetrical square surrounded by buildings with red brick and white stone facades, steep slate roofs and dormer windows, all constructed over arcades. The square was officially inaugurated in 1612 as the 'Place Royale'. At that time merely a lawn, it was a favorite place for duels.
The Place de la Bastille is where the Bastille prison stood until the 'Storming of the Bastille' and its subsequent physical destruction between 14 July 1789 and 14 July 1790 during the French Revolution; no vestige of it remains. The square of the Bastille was created later, in 1803. The only monument still standing on the square is the Colonne de Juillet, a column commemorating another revolution in 1830 during which king Charles X was replaced by king Louis-Philippe. It is topped by the 'Spirit of Liberty' statue. 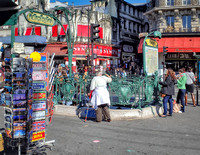 Stairs up to the Basilica of the Sacred Heart of Paris, commonly known as Sacré-Cœur Basilica. Not a bad walk once you beat off all the scam bracelet peddlers at the bottom. 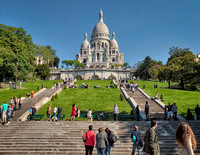 Close up of the Basilica of the Sacred Heart of Paris, commonly known as Sacré-Cœur Basilica. 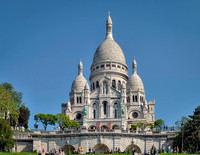 Harp player on the steps of the Basilica. 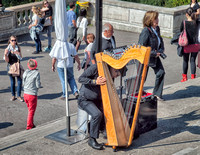 View to the south from the Basilica with the Montparnasse Tower towering in the distance to the right.

Side view of the front of the Basilica of the Sacred Heart of Paris, commonly known as Sacré-Cœur Basilica. 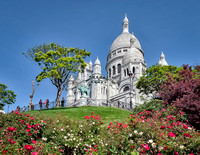 Equestrian statue of Saint Joan of Arc in front of the Basilica. 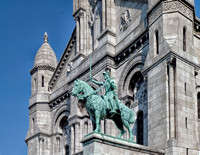 Equestrian statue of King Saint Louis in front of the Basilica. 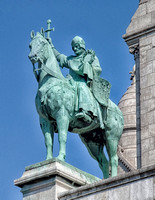 Altar inside the Basilica of the Sacred Heart of Paris, commonly known as Sacré-Cœur Basilica. 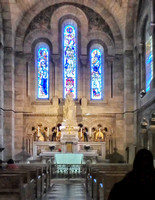 Interior of the Basilica. 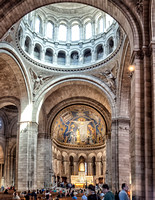 Gargoyle and architectural details of the exterior of the Basilica. 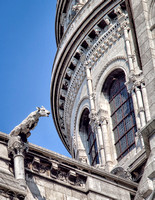 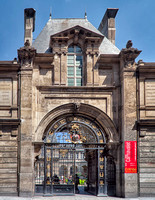 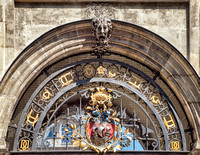 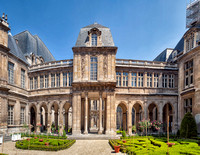 On the left is a sign of taillandier (ironmonger) traditional craft of manufacturing cutting tools, such as scissors and shears. 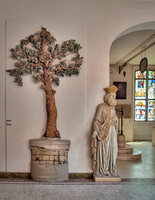 The reception room from Hôtel d'Uzès created in 1761 by Claude Nicolas Ledoux. The gold and white paneling is from a Rue Montmartre mansion.

Musée Carnavalet "Voltaire" room in the style of the 18th century. 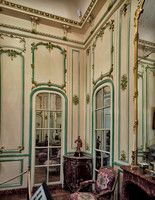 Musée Carnavalet room exemplifying Paris in 19th century of the 2nd Empire and the 3rd Republic. 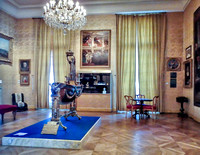 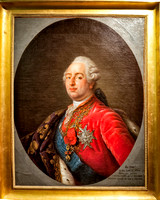