40 photos
The Crypte Archéologique is a huge and haunting space extending under the shadow of Notre Dame Cathedral. It is a time capsule which explores the lives and artifacts of the tribes and civilizations of long ago. It includes the remains of a house from Lutèce, the precursor to Paris and numerous Gallo-Roman artifacts, which provide insight into how members of the Roman Empire lived in Paris. It also includes a recreated settlement of the Parisii, the Celtic tribe that first settled on the site of Paris 2000 years ago and from whom the city takes its name.
The Panthéon is a building in the Latin Quarter of Paris. It was originally built as a church dedicated to St. Genevieve, modeled after the Pantheon in Rome, but after many changes now combines liturgical functions with its role as a famous burial place.
An exhibition on the life of Josephine Bonaparte was on display at the Luxembourg Museum. My patient husband relaxed outside while I explored every aspect of what was on display!

A man handfeeding birds in the plaza in front of Notre Dame Cathedral, fun to watch! 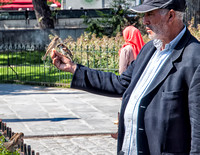 Entrance sign to the archeology crypt under the plaza in front of Notre Dame. 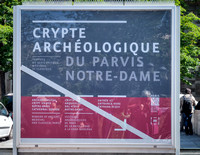 Beginning in 1163 AD as part of initial work on Notre Dame the Rue Neuve Notre-Dame was built with a house (for the Bishop of Paris) on both sides of the street. Arch is part of basement of the house. 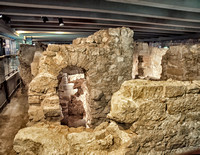 Archeology crypt under the plaza in front of Notre Dame. This is a remnant of the Roman quay on the Seine with an image in the background showing what the original may have looked like. 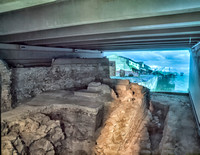 A general view of the crypt. Medieval cellars in foreground and in the background the original smooth stone flagged cold room floor of the Roman baths are visible. Eastern end of the Church of Saint-Séverin. 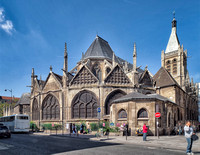 Place de la Sorbonne in the Latin Quarter was the historical home of the former University of Paris. 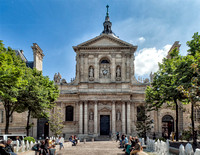 Saint-Étienne-du-Mont located on the Montagne Sainte-Geneviève near the Panthéon. 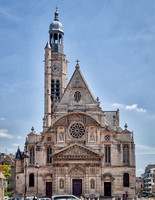 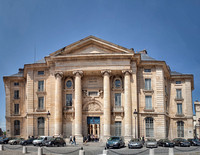 The Panthéon in the Latin Quarter in Paris was originally built as a church dedicated to St. Genevieve and to house the reliquary châsse containing her relics. 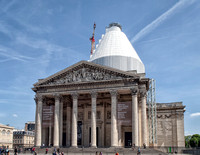 Interior of the Pantheon. 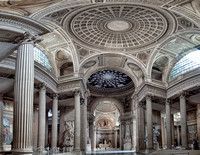 A small world indeed! Betty & Jorge Piekarewicz friends from Tallahassee who we ran into at the Pantheon. 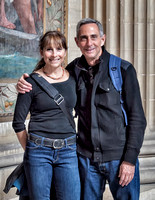 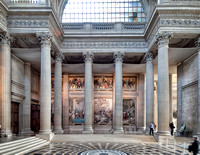 Murals in the Pantheon. 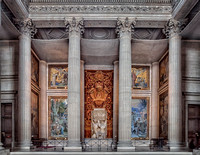 Close up of the Jules Eugène Lenepveu Boussaroque de Lafont paintings of Joan of Arc in the Pantheon.

Detail of the painting of Joan of Arc at Rheims for the coronation of King Charles VII in the Pantheon. 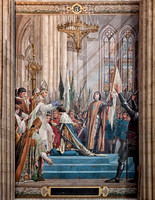 Scale model of the Pantheon. 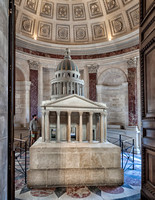 Voltaire's tomb in the crypts of the Pantheon. 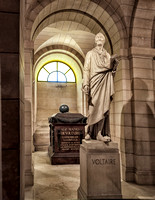 Tombs of Victor Hugo and Alexandre Dumas in the crypts of the Pantheon. 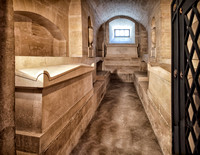 Tombs of Marie and Pierre Curie in the crypts of the Pantheon. 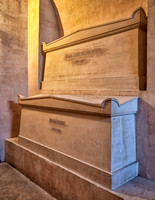