46 photos
The Cathédrale Notre-Dame de Chartres, located in the medieval town of Chartres, is about 50 miles from Paris. It is almost perfectly preserved in its original design and details, and its stained-glass windows are almost all originals. It is the only cathedral that represents an almost perfect image of how it looked when it was first built.
The cathedral has been a major pilgrimage destination since the early Middle Ages. The present cathedral is a French Gothic masterpiece built because fire had destroyed its predecessors. After the first cathedral of any great substance burnt down in 1020, a new Romanesque basilica was built. It survived a fire in 1134, but on the night of June 10, 1194, lightning ignited a great fire that destroyed all but the west towers, the facade and the crypt.
Rebuilding began almost immediately with the people of Chartres volunteering to haul the necessary stone from quarries 5 miles away. The construction project used the plans laid out by the first architect to preserve the harmonious aspect of the cathedral. By 1220 the main structure was complete, with the old crypt, the west towers and the west facade incorporated into the new building. On October 24, 1260, the cathedral was dedicated in the presence of King Louis IX and his family. The cathedral was added to UNESCO's list of World Heritage Sites in 1979.

At many places in the Loire River valley, structures are built in part or in whole into steep valley cliff sides which are composed of soft, easily excavated tuffeau (limestone). 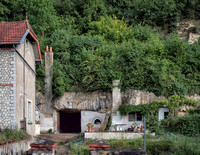 At many places in the Loire River valley, structures are built in part or in whole into steep valley cliff sides which are composed of soft, easily excavated tuffeau (limestone). 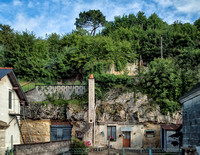 Loire River valley countryside on the way to Chartres.

Chartres - the statute of François Séverin Marceau-Desgraviers (1769 – 1796) a French general of the Revolutionary Wars. 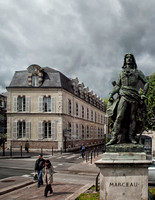 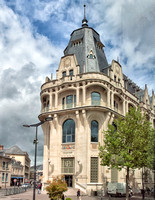 Looking east at the front of Chartes Cathedral from the Place Châtelet. 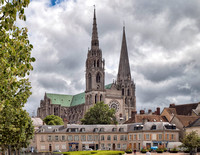 West end (portail royal dating to the 12th century) of Chartres Cathedral. It is the last of at least five which have occupied the site since the town became a bishopric in the 4th century. 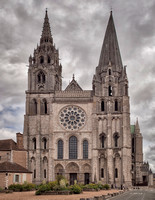 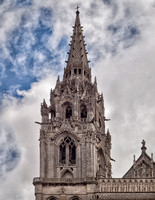 Detail of the sculptures on exterior of the west facade of Chartres Cathedral above the rose window. 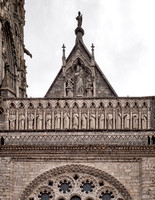 View looking northeast along the southeast side of Chartres Cathedral provides a good view of the South transept entrance. 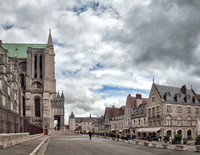 Panorama, somewhat "bent" on the right side, of the south side of the Chartres Cathedral. In the middle are some of the flying buttresses that hold the weight of the walls. 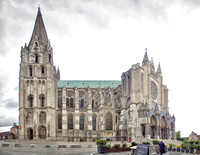 South entrance. The south transept portals address the time from Christ's death until his Second Coming.

East end of the south side of Chartres Cathedral. 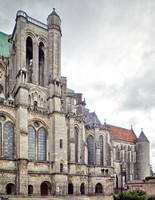 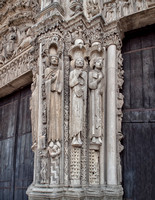 Detail of the exterior of the rose window on the west facade of Chartres Cathedral. 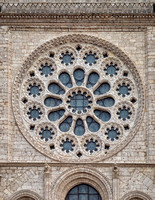 A lancet and preserved panel of Romanesque glass from the 12th century. This is one of the more notable windows, the Blue Virgin, renowned for the quality of the blue obtained from cobalt oxide.

Lancet showing the Life of the Virgin is located on the south side of the choir in the 2nd bay east of the south transept just east of the Blue Virgin (Notre Dame de la Belle Verrière).

Lancet window depicting the Life of St Anthony of the Desert or Egypt located on the south side of the choir just east of the south transept and to right of the Blue Virgin.

South transept rose window (created c.1225–30) is dedicated to Christ, who is shown in the central oculus, right hand raised in benediction, surrounded by adoring angels.

South transept. Central is Virgin with infant Christ. On sides are lancets of the 4 evangelists on the shoulders of 4 prophets – a rare illustration that the New Testament builds upon the Old. 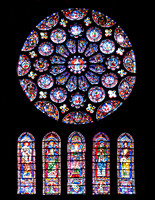