18 photos
Glastonbury Abbey was established as a Benedictine monastery, under Beorhtwald, its first Saxon abbot, during the years 670 to 678 AD. Prior to that time, it had existed for many years as a Celtic religious center. Legend says Joseph of Arimathea brought Jesus here and they built the old wattle and daub church. Archaeology tells us that Christianity was present since Roman times. The Abbey was destroyed by fire in 1184 and rebuilt.
In 1536, during the 27th year of the reign of Henry VIII, there were over 800 monasteries, nunneries and friaries in Britain. By 1541, there were none. More than 10,000 monks and nuns had been dispersed and the buildings had been seized by the Crown to be sold off or leased to new lay occupiers. Glastonbury Abbey was one of principal victims of this action by the King, during the social and religious upheaval known as the Dissolution of the Monasteries.

The Anglican Church of St John the Baptist in Glastonbury. There has been a church on this site for over a thousand years. The cross in the left foreground is a World War I memorial.

Glastonbury Tor. St Michael's Church on the summit of the Tor survived until the Dissolution of the Monasteries in 1539 when, except for the tower, it was demolished. 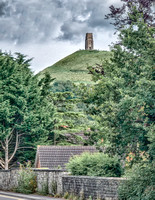 Glastonbury Abbey from the car park. Lady Chapel just behind the wall and remains of abbey tower on the right.

North side of the Lady Chapel, which is a traditional English term for a chapel inside a cathedral, basilica, or large church dedicated to the Virgin Mary. 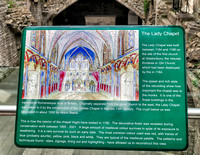 Lady Chapel interior at Glastonbury Abbey as seen from the west end. 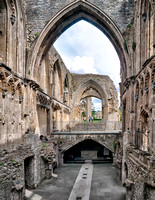 Tor (hill) from Abbey grounds. Many myths & legends are associated with the Tor - it is the home of Gwyn ap Nudd, the Lord of the Underworld & King of the Fairies & a place where the fairy folk live.

Glastonbury Abbey viewed from the south with the Lady Chapel on the left and remains of the abbey in the center and right.

Closeup of the south side of the Lady Chapel at Glastonbury Abbey.

Closeup of the south side of the Glastonbury Abbey remains.

According to legend, the King Arthur and Guinevere grave site at Glastonbury Abbey. 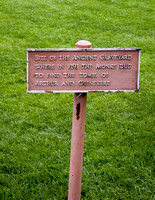 View east down what once was the central aisle of Glastonbury Abbey.

Interior of the Lady Chapel at Glastonbury Abbey as seen from the east end.

Glastonbury Abbey thorn tree. It is said to ‘miraculously’ flower twice a year – once at Christmas and once at Easter.

Glastonbury Abbey thorn tree marker. Joseph of Arimathea is said to have planted his staff on Wyrral Hill which grew into a thorn tree.

Model of Glastonbury Abbey as it was centuries ago. 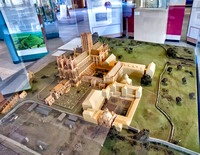