18 photos
Cardiff Castle is one of Wales’ leading heritage attractions. Located at the heart of the capital, within beautiful parklands, the Castle’s walls and towers cover 2,000 years of history.
The Roman fort was probably established at the end of the 50s AD. After the Norman conquest, the Castle’s keep was built, re-using the site of the Roman fort.
The Castle passed through the hands of many noble families. From 1866 the 3rd Marquess of Bute hired the architect William Burges to transform the Castle lodgings. When the Marquess died in 1900 he had transformed the Castle into a Welsh Victorian Camelot. Eventually the family decided to give the Castle and much of its parkland to the city of Cardiff. For 25 years, the Castle was home to the National College of Music and Drama. Since 1974 it has become one of Wales’ most popular visitor attractions.

The Queens Vaults Pub. The name ‘Vaults’ is unusual for South Wales, the term used more in Northern England and meaning a workingmen’s bar, as opposed to a more upmarket ‘smoke room’ or ‘lounge'. 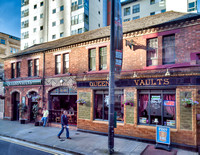 Cardiff Castle outer wall and Clock Tower. The Clock Tower was built on the site of a Roman bastion and completed in 1875. 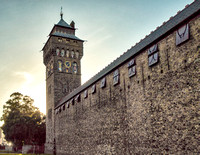 Set to either side of the large, cast iron clocks on each face of the tower are seven over life-sized figures representing the planets as Roman gods, portrayed in medieval costume. 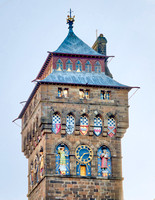 Welsh dragon sculpture inside the main gate. The red Welsh dragon (Y Ddraig Goch) is the national symbol of Wales. 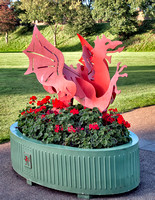 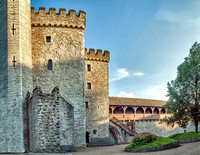 The Norman Keep. Built in the 12th century the 12 sided keep survives in good condition and stands proudly on it's motte or small hill within the walls of Cardiff Castle.

Cardiff Castle main range (lodging) which in Victorian times was transformed into a gothic fairytale fantasy. Our dining room was under this building.

Clock Tower view from inside the walls.

Detail of the balcony below the Clock Tower. 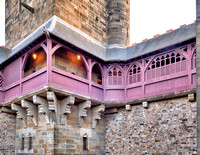 "Lunatic" master of ceremony for the dinner & entertainment. If dressed in a jester's costume he would have fitted right into a medieval Court setting. 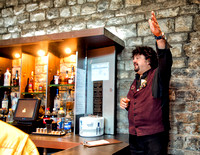 Our dining room. Dating from the 15th Century, the Undercroft is one of the oldest parts of the Castle. 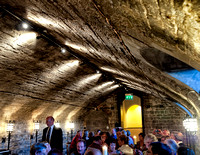 The servers (who are also professional singers) were dressed in traditional Welsh costume. 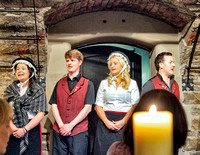 We ate local dishes while the choir entertained with medieval music and stories from days of old. A fabulous evening!! 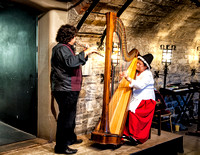 He was a Major Hoot! When he learned we were from Florida he excitedly shared that he was taking his nephew to Disney World. I told him how to visit the Real Florida also. :-) 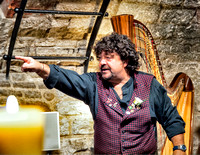 These guys from the audience were really good sports. 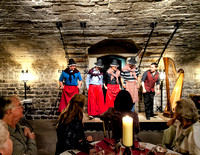 As we left the dinner the Norman Keep stood watch over the darkened Castle. 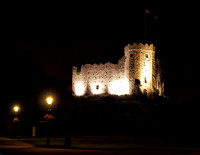