30 photos
Our tour was called "Country Roads of France". After a beautiful start to the day in Grenoble we traveled on two lane roads through a gorgeous rural part of southeastern France. Our driver was awesome!
We finished the day by checking into a two night stay at our hotel right on the Mediterranean in Nice, with a great view of the deep blue waters of the Cote d’Azur. This coastline was one of the first modern resort areas. It began as a winter health resort for the British upper class at the end of the 18th century. With the arrival of the railway in the mid-19th century, it became the playground and vacation spot of British, Russian, and other aristocrats, such as Queen Victoria and King Edward VII. After World War II, it became a popular tourist destination and convention site.

View to the south from near our hotel along the Boulevard Maréchal Joffre, Grenoble, France. 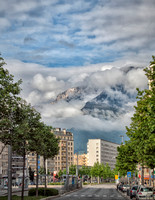 Small store at the Col de la Croix-Haute (el. 1179 m.) which is a high mountain pass in the French Dauphiné Alps on the border of the Isère and Drôme departments. 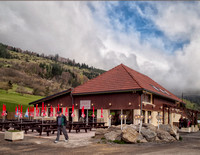 Landscape in the vicinity of the Col de la Croix-Haute, France. 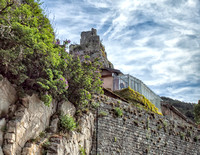 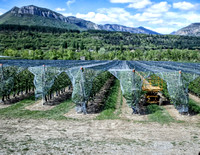 Looking south at the Citadelle de Sisteron which guards a gap in the mountains where the Durance River flows from the Dauphiné into the Provence. 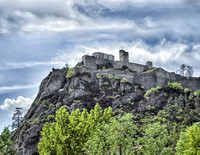 Street view in Digne-les-Bains where we stopped for lunch. 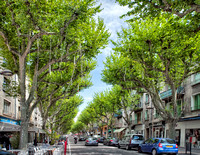 Monument to those who died for France during World Wars I and II and Indochina in Digne-les-Bains. 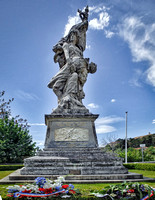 Looking south along the shore of Lac de Castillon near Saint-Julien-du-Verdon.

Looking north along the shore of Lac de Castillon near Saint-Julien-du-Verdon.

The road between Saint-Julien-du-Verdon and Les Scaffarels was narrow, winding, and steep. 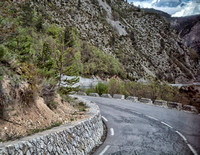 Watch tower overlooking the Le Var River and the town of Entrevaux. 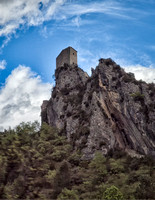