46 photos
When Monet and his family settled in Giverny in 1883 the piece of land sloping gently down from the house to the road was planted with an orchard and enclosed by high stone walls. From this original property Monet made a garden full of perspectives, symmetries and colors. He did not like organized nor constrained gardens, instead grouping flowers according to their colors and letting them grow freely. Ten years after his arrival at Giverny, Monet bought the piece of land neighboring his property. It was crossed by a small brook, the Ru. He first had a small pond dug which later would be enlarged to its present day size. The water garden is inspired by the Japanese gardens that Monet knew from the prints he collected avidly. Unfortunately after the Second World War the house and garden were neglected. It took almost ten years to restore the garden and the house as not much was left. The greenhouse panes and the windows in the house had been reduced to shards after the bombings. Trees were growing inside of the studio and the pond had to be dug again and the Japanese bridge rebuilt. It has been open to the public since 1980.
In the afternoon we took a river cruise that departed from the Eiffel Tower and swept through the heart of historic Paris along the beautiful banks of the Seine, which are listed as a UNESCO World Heritage Site.

Map of attractions in Giverny, the location of Claude Monet's garden and home. 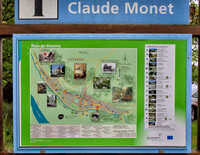 Claude Monet's water garden, formed by a tributary to the Epte, showing the pond with the water lilies. 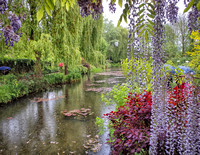 Claude Monet's water garden, with the Japanese bridge in the distance. 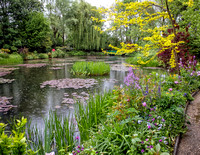 Close-up of the Japanese bridge, I rather like the bright colored umbrellas on the left. 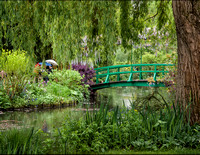 A bit blurry, but it was amazing to actually be standing on the bridge, with photo-ops all around! 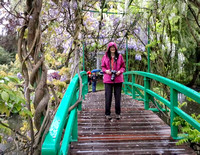 Monet's garden and home in the distance.

Gorgeous mix of flowers in front of the house. 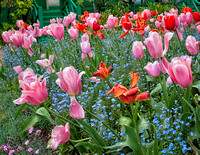 Looking across Claude Monet's garden from the entrance to his house.

View of the garden from the second story of the house.

He liked to cluster flowers with similar colors. 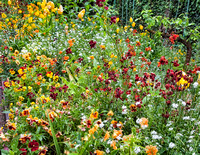 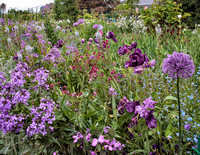 Close-up of some stunning tulips mingled with other flowers. 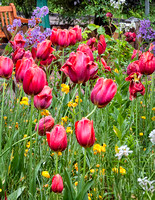 After touring Monet's garden and home we stopped here for coffee and a wonderful apple pastry, extra nice after walking in the chilly rain! 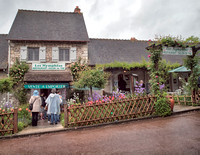 Heading back to the bus along the Epte which is a river in Seine-Maritime and Eure, in Normandy, France. It is a right tributary of the Seine and a bit of flow was diverted for Monet's Garden. 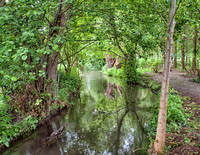 Coming back into Paris the back of the replica of the Statue of Liberty near the Grenelle Bridge on the Île des Cygnes. Dedicated in 1889, it looks towards its "larger sister" in New York Harbor. 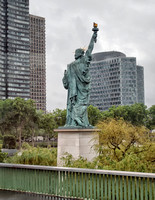 One of 4 allegorical statues by Jean Antoine Injalbert on the Pont Mirabeau this represents "The City of Paris" which is the prow of the boat on the right bank downstream side of the bridge.

Pont d'Iéna ("Jena Bridge") is a bridge spanning the Seine. It links the Eiffel Tower on the Left Bank to the district of Trocadéro on the Right Bank.

Typical houseboat on the Seine River. 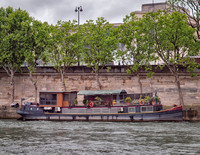 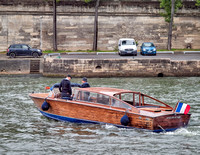