59 photos
The Army Museum at Les Invalides was originally built by Louis XIV as a hospital and home for disabled soldiers. It now houses the Tomb of Napoleon and the museum of the Army of France. The museum has a huge collection of military paraphernalia dating from antiquity to the present day.
First opened to the public in August 1919, the Musée Rodin is housed in a mansion built in the Rue de Varenne, Paris, between 1727 and 1732. Nearly 300 works from Rodin’s collection are on view.
For nearly a 1,000 years since before Charlemagne, the French monarchy had buried its dead in the gorgeous Gothic cathedral of Saint Denis. The cathedral is the first great Gothic church in Europe, one whose beauty and elegance inspired a sacred "arms race" among the cities and prosperous towns of Europe to build equally-elaborate (and especially, more-elaborate) spires and flying buttresses.
By 1789, things in France had deteriorated to the point that peasants were starving while the upper classes lived in gaudy excess. After the Revolution, the trappings of the aristocracy were destroyed or sold off for the people. At Saint Denis, nearly a thousand years of history were undone when the tombs of the royals were opened and their corpses buried in quick lime in a pit outside the cathedral.
After Napoleon's first exile, to the island of Elba, the Bourbons briefly returned to power. They ordered a search for the corpses of Louis XVI and Marie Antoinette, which were found in January 1815 and brought to Saint Denis. They were buried in the crypt. After Napoleon's final defeat at Waterloo (1815) the Bourbons had the opportunity to search for the remains of their ancestors. The mass-graves were opened in 1817, but it had of course become impossible to distinguish any individuals in the mass of bones. Therefore, the remains were put in a small room in St Denis' crypt, behind two marble plates with all their names on them.

Cannons with the Eiffel Tower in the background as seen from outside the north entrance to Les Invalides within which are located the Musée de l'Armée, and the tomb of Napoleon Bonaparte.

Looking north from the north entrance to Les Invalides up Marshal Gallieni Avenue toward the Grand Palais des Champs-Élysées (glass building with flag on the top in left background).

North entrance to Les Invalides within which are located the Musée de l'Armée, and the tomb of Napoleon Bonaparte.

Jim walking toward the north entrance to Les Invalides. 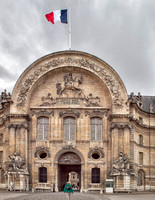 Courtyard just inside the north entrance to Les Invalides. The tomb of Napoleon Bonaparte is located under the golden dome in the background. 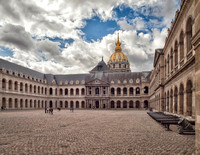 Gendarme heavy cavalry armour just inside and to the left of the entrance to the armour section. 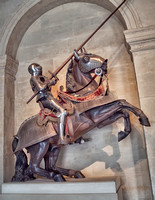 Gendarme heavy cavalry armour just inside and to the right of the entrance to the armour section of the Musée de l'Armée. 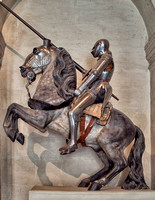 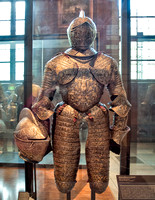 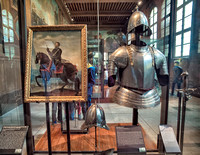 Equestrian armour of Francis I in the Musée de l'Armée. 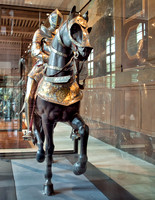 Equestrian armour of Otto Heinrich, Count Palatine of the Rhine in the Musée de l'Armée. 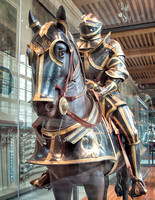 Half armour in the Musée de l'Armée. 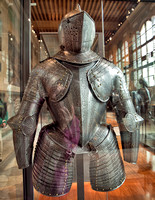 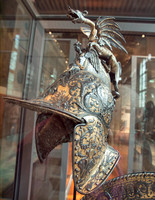 Early firearms (appear to be wheellocks) in the Musée de l'Armée. 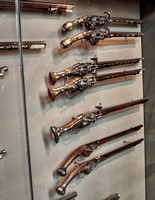 Jousting armour made by Hans Rosenberg of Wittenberg, ca. 1,560 AD in the Musée de l'Armée. 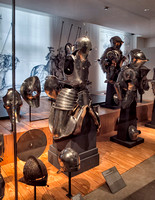 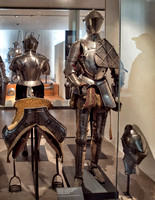 Entrance to the Eglise du Dome Church at the Hotel des Invalides where Napoleon's tomb is located. 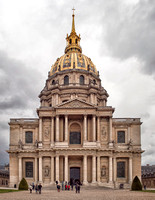 Tomb in the Eglise du Dome Church of Joseph-Napoléon Bonaparte (1768–1844) the elder brother of Napoleon Bonaparte, who made him King of Naples and Sicily and later King of Spain. 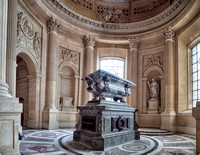 Interior of the dome of the Eglise du Dome Church at the Hotel des Invalides where Napoleon's tomb is located.