37 photos
Leeds Castle has been a Norman stronghold; the private property of six of England’s medieval queens; a palace used by Henry VIII and his first wife Catherine of Aragon; a Jacobean country house; a Georgian mansion; an elegant early 20th century retreat for the influential and famous; and in the 21st century, it has become one of the most visited historic buildings in Britain.
The White Cliffs of Dover are cliffs which form part of the English coastline facing the Strait of Dover and France. The cliff face, which reaches up to 350 feet, owes its striking facade to its composition of chalk accentuated by streaks of black flint. The cliffs were on the front line in both world wars and, with France just 21 miles away, the White Cliffs of Dover became a crucial part of the British defenses.

Remains of the original entrance to Leeds Castle.

View to the northeast on the northwest side of Leeds Castle. 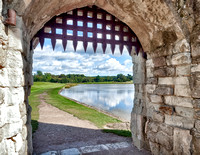 Breezy day, we are standing with the main buildings at the northeast end of Leeds Castle in the background.

View of Leeds Castle from the northwest. Queen Elizabeth I was imprisoned here for a short time before her coronation.

This newer castle was completed in 1823 in the Tudor style.

Exterior detail of Leeds Castle adjacent to the moat wall. 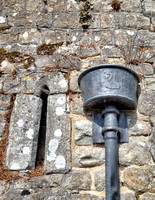 The "Island" portion of Leeds Castle behind the new castle was built in the 13th century.

View from the interior walkway to the "Island" portion of Leeds Castle behind the new castle. I wonder who, both noble and commoner, has viewed this very scene over the centuries. 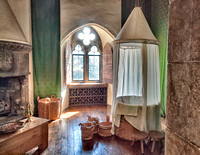 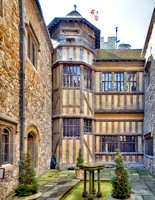 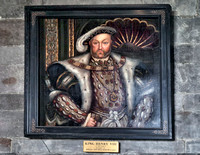 Interior of the chapel.

Thorpe Hall Drawing Room. Paneling and chimneypiece date from 1653 and were bought from Thorpe Hall in the 1920's. 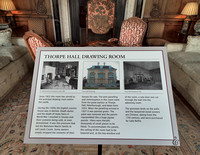 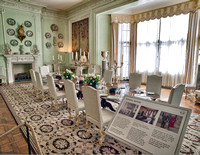