42 photos
We awaken to fresh snow on the mountains surrounding Chamonix and after another amazing breakfast head to Annecy. It is an alpine town in southeastern France, where the River Thiou meets Lac d’Annecy. It’s known for its Vieille Ville (old town), with cobbled streets, winding canals and pastel-colored houses. Overlooking the city, the medieval Château d’Annecy was once home to the counts of Geneva. It is also called the Venice of Savoie. Lake Annecy is the third largest lake in France. It is renown as "Europe's cleanest lake" because of strict environmental regulations introduced in the 1960s and is a popular tourist destination known for its swimming and water sports. The lake was formed about 18,000 years ago, at the time the large alpine glaciers melted. It is fed by many small rivers from the surrounding mountains and from a powerful underwater spring, the Boubioz.
Grenoble, a city in the Rhône-Alpes region of southeastern France, sits at the foot of mountains between the Drac and Isère rivers. It's known as a base for winter sports, and for its museums, universities and research centers. Spherical cable cars called “Les Bulles” (Bubbles) connect the town to the summit of La Bastille hill, named for the 18th-century fortress on its slopes. We gave serious thought to riding on the Bubbles but ran out of time (oh, darn).

When it came time for us to leave Chamonix we found that there had been a light dusting of snow overnight with the snow cover ending just a few hundred feet up the mountains above the town.

On the way south from Chamonix we passed under a scenic railroad overpass. 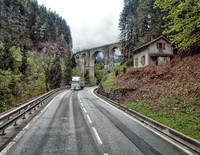 One of many waterfallls in the French Alps on the way south from Chamonix. 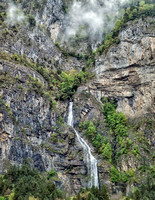 Canal view in Annecy, France. If walls could talk, the history these buildings hold!

The monumental neo-classical Notre-Dame de Liesse Church was rebuilt between 1846 and 1851 after the previous one was demolished during the French Revolution. 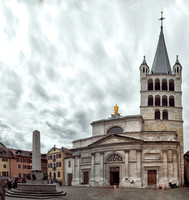 In front of the Notre-Dame de Liesse Church is an obelisk fountain supported by turtles: the water cascades from the mouths of lions into an octagonal basin set in a monolith of granite. 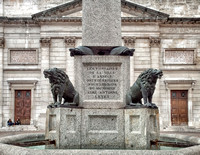 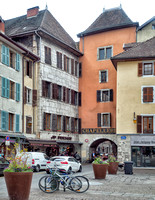 Jim and Virginie Gravier our Tour Director share a moment with coffee (which also gave us access to a restroom). 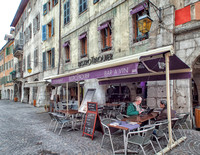 View of the interior west end of the Notre-Dame de Liesse Church. 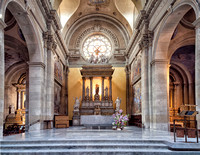 Annecy Cathedral (Cathédrale Saint-Pierre d'Annecy) is a Roman Catholic cathedral. It was built at the beginning of the 16th century by Jacques Rossel as a chapel for a Franciscan priory. 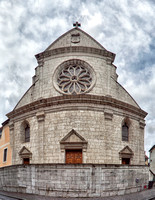 Another canal view, they were all so beautiful! 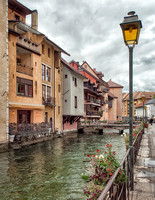 Looking east at the fortified Palais de l’ile which was built on a natural rocky island in the 12th century. 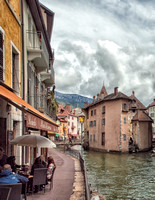 A canal view with the fortified Palais de l’ile in the distance. 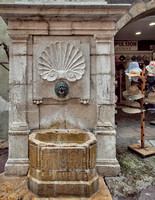 Jim looking at the entrance to World War II bomb shelters dug under the Château d'Annecy. 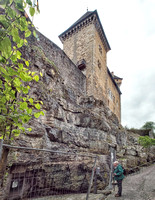 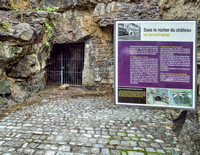 Jim in front of the entrance to the Château d'Annecy which was built between the 12th and 16th centuries.

The courtyard of the Château d'Annecy. 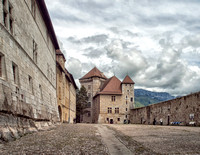