Home»All Photographs»Iona, Scotland and Ireland August-September 2015»Book of Kells then on to Glendalough via the Wicklow Mtns finishing with Irish food and dance

27 photos
The book of Kells is a illuminated manuscript stored in the Trinity College Library, Dublin. There is considerable debate about the origin of the manuscript with one possible location being the monastery on the island of Iona off the west coast of Scotland.

We then drove south through the Wicklow Mountains to the monastery at Glendalough and returned to Dublin driving past Sugarloaf Mountain.

The day was finished off with a fun evening of Irish food followed by lots of Irish song and dance. 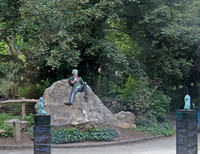 Merrion Square Park, Dublin is flanked by Georgian townhouses many of which have colorful doors. 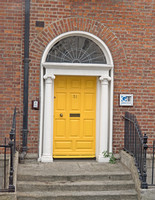 L to R Francie and Jim Stoutamire waiting to go into the Book of Kells exhibit at Trinity College, Dublin 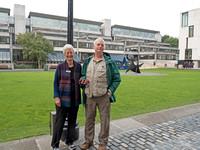 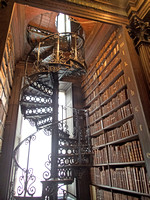 The Long Room in the Old Library at Trinity College, Dublin seems to go on forever. 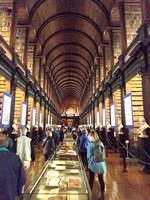 Brian Boru's Harp in the long room at Trinity College, Dublin is an early Irish harp or wire strung clairseach that dates to the 14th or 15th century and is one of the three oldest Gaelic harps.

Christ Enthroned a page of the Book of Kells, Trinity College. The Book is an illuminated Gospel in Latin created in a Columban monastery in Ireland or maybe Iona, Scotland ca. 800 AD.

Desmond Kinney's mosaic on Nassau St.; the Tain Wall commemorates Setanta, the Celtic God of Light, by depicting all the major events occurring in the Tain Bo Cuailnge Irish epic set 2000 years ago.

Looking west from the O'Connell Bridge at the Ha'penny Bridge a pedestrian bridge built in 1816 over the River Liffey, Dublin. The name refers to the original pedestrian toll.

Glendalough was founded by St. Kevin in the 6th Century and flourished until destroyed by the English in 1398. 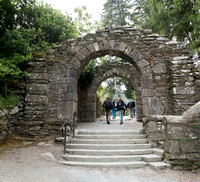 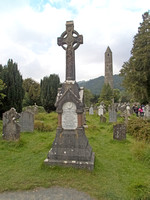 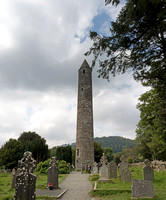 The west entrance to the Cathedral of St Peter and St Paul which is largest of the seven churches at Glendalough and was built in several phases from the 10th through the early 13th century. 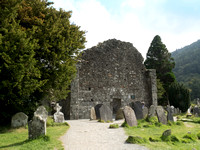 View to the west from Glendalough with the lower lake visible in the distance. 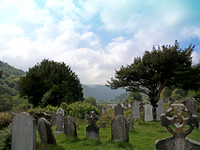 Cathedral of St Peter and St Paul, Glendalough, looking west from the chancel across the nave to the west entrance. 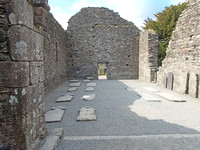 Cathedral of St Peter and St Paul, Glendalough, looking east from the nave into the chancel, which is just past the steps and remnant of the roof arch. 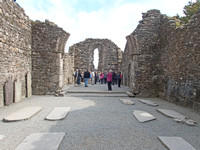 Detail view from the inside of the west entrance to the Cathedral of St Peter and St Paul at Glendalough. 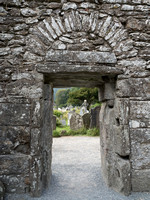 St. Kevin's Church (a.k.a. St. Kevin's Kitchen) dates to the 12th century and is built entirely of stone including the roof. 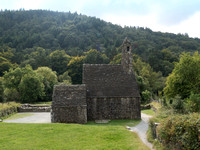 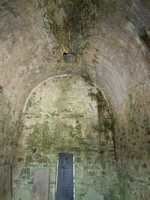 Looking past the Priest House at the remains of the 10th Century St. Mary's Church at Glendalough.