36 photos
Cobh, formerly Queenstown, is the port city for Cork and was the last stop of the Titanic on her maiden voyage. While in Cobh we visited the cathedral, which stands high on a hill above the town, and the Titanic Museum.
After seeing a bit of the center of Cork we moved on to Blarney Castle where Jim and Francie passed on tourist adventure of kissing the Blarney Stone as not worth the climb to the top of the Castle. Instead we toured the wonderful forested gardens.
Then off to Killarney through the cloudy Derrynasaggart Mountains.

Cork Harbor viewed from the grounds of St Colman's Cathedral overlooking Cobh. Historic - note Cobh was named Queenstown from 1849 until 1920. 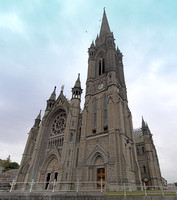 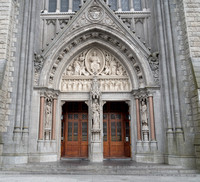 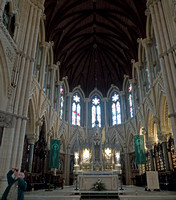 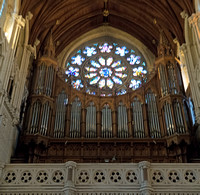 St Colman's Cathedral looking through the nave to the high altar. 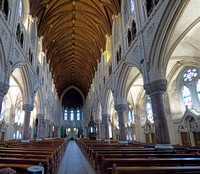 Annie Moore and her brothers looking to America. 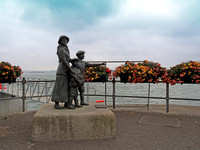 The RMS Lusitania Peace Memorial is located in Casement Square in Cobh. 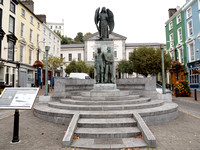 It may not be there much longer but this is the original pier where passengers boarded tenders to the Titanic at its anchorage near the mouth of the harbor. 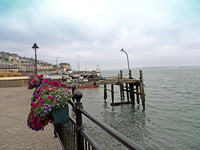 A passing view, from the tour bus, of Belvelly Castle a 14th or 15th-century tower house on the north shore of the island on which Cobh is located. 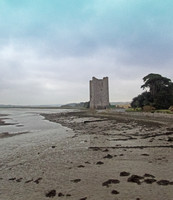 Built between 1859 and 1866 Saints Peter and Paul's Church is a Catholic church located in heart of Cork on a narrow street so getting a frontal image of the entire facade is virtually impossible.

Altar at Saints Peter and Paul's Church is a Catholic church located in heart of Cork.

Approach to Blarney Castle; that's Jim Stoutamire in the green jacket on the bridge (another picture of his back) 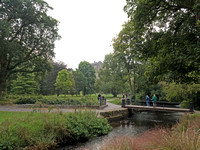 Looking south at the imposing Blarney Castle keep with a round tower in the outer wall to the left. Blarney Castle was built in 1446 by Cormac Laidir MacCarthy, Lord of Muscry. 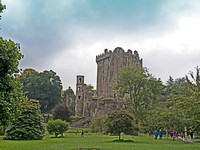 The north side of Blarney Castle towers abruptly on the bluff overlooking the adjacent stream.

East wall of Blarney Castle showing a bit of its outer curtain wall and a fortified tower to the east of the main castle, replete with gun loops, that was probably built in the 16th century. 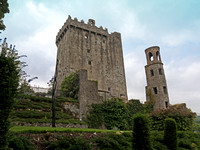 South wall of Blarney Castle; for those who wished to kiss the Blarney Stone it is just below the parapet above the top window on the left. 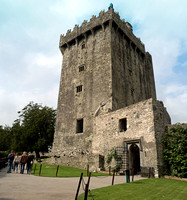 The Blarney Stone is the rectangular rock with metal straps holding it to the bottom of the parapet. 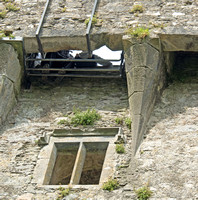