44 photos
Saint-Malo was founded in the 1st century BC a short distance south of its current location.
The citizens of Saint-Malo have traditionally displayed a fiercely independent spirit which over the centuries has found them in and out of conflict with the rulers of Brittany, France and England. Nobody typified this more than the city's sailor merchants who grew wealthy from pillaging foreign ships out in the channel. In 1403, during the Hundred Years War, they even ventured as far as raiding Plymouth and Yarmouth on the English coast.The corsairs of the 17th/18th centuries acted as official pirates. The King of France granted them licence to go "coursing" after enemy vessels in return for a percentage of the profit from captured ships, hence the name corsairs.
The city was almost completely destroyed during the Second World War. Nearly 30 years of painstaking reconstruction has returned Saint-Malo to its former glory and transformed it into one of the most popular places to visit in Brittany.

A good example of where Agneau de pré-salé (French: "Salt meadow lamb"), a type of lamb which was raised in salt marsh meadows of France, especially Mont Saint-Michel, are raised.

Much to our surprise on the way from Mont Saint-Michel to Saint-Malo through Brittany we passed a number of windmills. 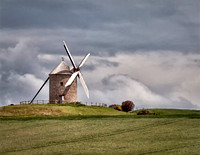 Some windmills have been turned into tourist attractions like this Maison des Produits du Terroir et de la Gastronomie. 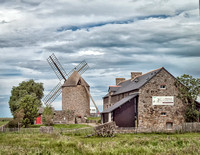 And some turned into houses with the windmill vanes removed. 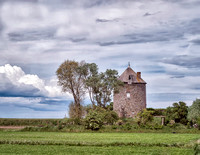 Land sail carts on the coast of Brittany on the way to Saint-Malo.

Fountain just outside the city gate to Saint-Malo. 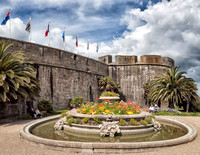 Saint-Malo coats of arms over the city gate. One on the left includes an ermine (type of weasel). 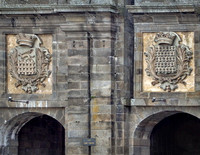 View toward the city gates (slightly left of center) of Saint-Malo.

Remnants of a portcullis or gate cranking mechanism in the city walls. 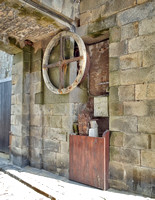 Fort National, a fort on a tidal island a few hundred metres off the walled city of Saint-Malo. The great military architect Vauban had it built in 1689 to protect Saint-Malo's port.

Nice sea view of sail boats from the walls of Saint-Malo, the afternoon was gorgeous!

Jim in the left foreground on the north wall of Saint-Malo.

Looking west at houses just inside the north wall of Saint-Malo.

Houses along the city wall of Saint-Malo.

Looking east along the north wall of Saint-Malo with Fort National on the left. The tree trunks next to the city wall are wave breaks.

Looking east along the north wall of Saint-Malo at low tide. The tree trunks next to the city wall are wave breaks. 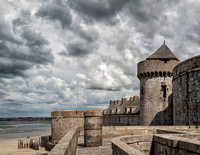 Looking east along the north wall of Saint-Malo at low tide. This area gets ferocious storms.