54 photos
St. Paul de Vence is a beautiful medieval fortified village perched on a narrow spur between two deep valleys. The village is one of the most complete medieval examples of the region, with most of the ramparts still intact. Like so many other places we visited large portions of the city are privately owned and used to house scores of art galleries, tourist shops and pseudo "artisanal" shops; all of which are very expensive!
Aix-en-Provence is a city of art, light and activity. Aix is also a home of art schools and several universities, including some American. Aix is also ancient: a Celtic-Ligurian capital from the 3rd century BC was pushed aside for the founding of Aix in 122 BC, as Aquae Sextiae.
The center of Aix is the old town (vieille ville), ringed by a circle of boulevards and squares. The medieval Aix was protected by a wall with 39 towers. Today only the 14th century "Tourreluquo" tower remains, at the northwest corner of the town.
In 1309 the Frenchman Bertrand de Got, who had been elected and crowned Supreme Pontiff in 1305, refused to go to Rome, choosing instead to install himself temporarily in the Dominican Convent at Avignon. Seven Popes were to reign there until the election of Martin V in 1417 and the return of the seat of the Papacy to Rome.
Avignon had been sold to Clement VI in 1348 by Queen Joan of Naples and Sicily, and it was to remain the residence of the Italian Papal legates for nearly four hundred years after the Papacy had returned to Rome. They were expelled at the time of the Revolution, when the people of Avignon opted to join France.

Looking south at St. Paul de Vence portions of which date to the 12th Century.

Modern sculpture in front of the 15th Century Chapelle Sainte-Claire on the walk up to the walled city of St. Paul de Vence. 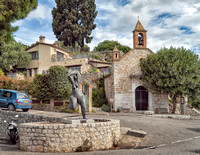 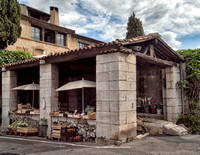 If one was so "lucky" as to breach the city gates of St. Paul de Vence this is the last thing you would see. 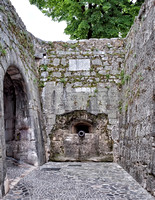 Drinking water fountain and trough inside the walled city. 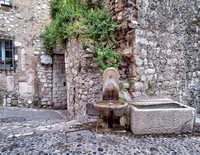 St. Paul de Vence is apparently cat heaven as they were everywhere. And the rock patterns in the streets were stunning! 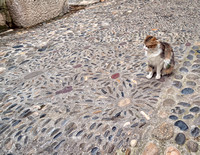 Streets of St. Paul de Vence. Much like Eze, narrow and steep. 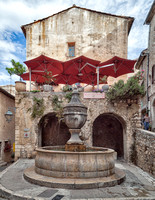 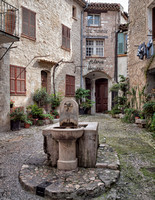 Gate to the cemetery at the south end of St. Paul de Vence which includes the grave of the painter Marc Chagall. 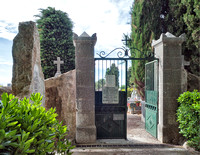 View across the cemetery to the south. 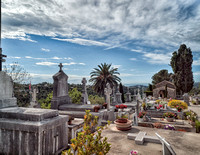 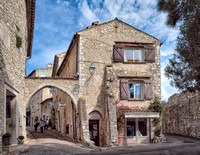 Remains of a 15th Century bastion at the south end of St. Paul de Vence complete with a caution sign about walking on the walls. 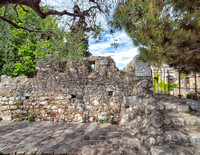 Looking south across the cemetery with the Mediterranean visible in the left distance. 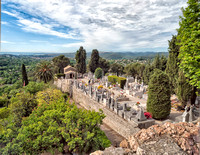 View of the Mediterranean south of St. Paul de Vence with Cape d'Antibes extending into the distance on the right and some fancy pyramidal hotels in the left center of the shoreline.

Moutains to the north of St. Paul de Vence.

I love old doors! Here is one of the more interesting ones. 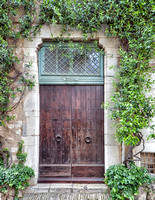 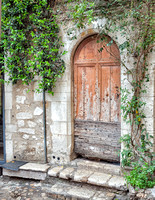 People live and work in the walled city, the doors are used daily. 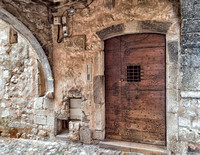 Collegiate Church of the Conversion of Saint Paul de Vence.