26 photos
This was an amazing event and at the top of the many highlights of our tour!
The name comes from a phrase originating from the Low Countries in the 17th and 18th centuries, “doe den tap toe”, commonly heard from innkeepers as local regiments were effectively marched out of the bar and told to return to their barracks. Over time, this march became a kind of ritual display, and it is here that the Tattoo in Edinburgh has its roots.
The first event in 1950 was mostly made up of various Scottish battalions – it now encompasses many civilian acts and a number of international military bands.
Performing this evening were the Massed Pipes and Drums, tunes: The Crofter; Colin's Cattle; The Herding Song; Cutting Bracken; Clean Please Strae; The Wind that Shakes the Barley; Na Goisidich; Speed the Plough. Bands; The Sheiling; The Harvester's Lullaby; Harvest Home; Tilling the Land: The Merse Piper; and The Muckin' o' Geordie's Byre: The Royal Scots Dragoon Guards; The Royal Corps of Signals; The Royal Highland Fusiliers, 2nd Battalion, The Royal Regiment of Scotland; The Black Watch, 3rd Battalion, The Royal Regiment of Scotland; The Highlanders, 4th Battalion, The Royal Regiment of Scotland; The Rats of Tobruk, Melbourne, Australia; Australian Federal Police Pipes & Drums, Canberra, Australia; The Manly Warringah Pipe Band, Sydney, Australia; The Cape Town Highlanders, South Africa; The Canadian Army Pipes & Drums; The Scots College Pipes & Drums, Sydney, Australia; and Queen Victoria School Pipes, Drums & Dancers, Dunblane, Scotland.

Edinburgh Castle at the start of the Tattoo which had two major themes: the celebration of Her Majesty the Queen’s Diamond Jubilee and celebrating the Year of Creative Scotland. 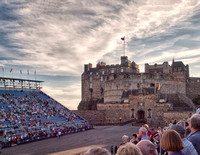 Dignitaries enter at the start of the Tattoo. 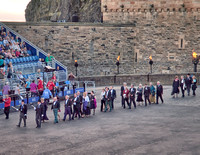 Opening ceremony of the Tattoo involves a bit of Scottish Whisky (and in Scotland it is spelled whisky NOT whiskey). 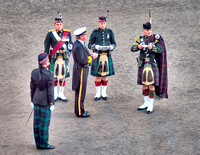 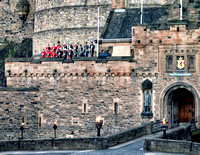 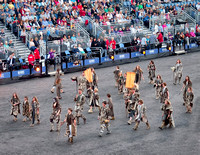 Massed Pipes and Drums emerge from the castle. 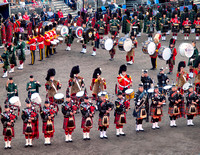 Students from the Queen Victoria School Pipes, Drums and Dancers from Dunblane, Scotland and The Scots College Pipes and Drums. 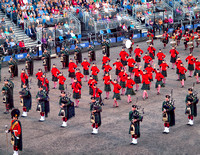 Students from Stewart's Melville College and Mary Erskine School in Edinburgh gather and dance in the lee of the standing stones. 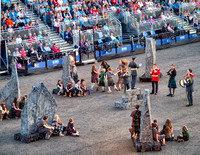 Pipes from the Royal Regiment of Scotland and Royal Scots Dragoon Guards. 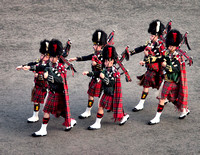 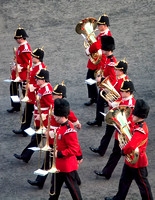 The Massed Highland Dancers (Edinburgh Tattoo's Highland Dancers and the Canadiana Celtic Dancers) celebrate the creation of Scotch Whisky accompanied by the music of the Royal Regiment of Scotland.

His Majesty The King of Norway's Guards Band and Drill Team.

Massed British Military Bands. Salute to her Majesty the Queen in her Diamond Jubilee year.