57 photos
The Louvre, originally built to the west as a fortress in 1190, has gradually been engulfed by the City of Paris. In 1527, François I decided to take up residence in Paris. The medieval keep was demolished, and it was converted into a Renaissance palace with more light and space. It was abandoned when Louis XIV moved to Versailles. With the Revolution, in 1793 the Museum Central des Arts opened to the public in the Grande Galerie and the Salon Carré, from where the collections gradually spread to take over the building. It has continued to grow into one of the world's largest and most visited museums today. It would take months to explore it properly!
Notre-Dame lies at the eastern end of the Île de la Cité and was built on the ruins of two earlier churches, which were themselves predated by a Gallo-Roman temple dedicated to Jupiter. The cathedral was started by the bishop of Paris, who about 1160 developed the idea of converting into a single building, on a larger scale, the ruins of the two earlier basilicas. The foundation stone was laid by Pope Alexander III in 1163, and the high altar was consecrated in 1189. The choir, the western facade, and the nave were completed by 1250, and porches, chapels, and other embellishments were added over the next 100 years. After the French Revolution it was rescued from possible destruction by Napoleon, who crowned himself emperor of the French in the cathedral in 1804.
The Conciergerie was built during the 14th century and is an example of early Gothic architecture. It was a former royal palace called Merovingian which was later converted to a prison in the 15th century. It was decommissioned in 1914 and was opened to the public as a national historical monument. It is today a popular tourist attraction, although only a relatively small part of the building is open to public access; much of it is still used for the Paris law courts.

Statue of Louis XIV outside the Louvre. 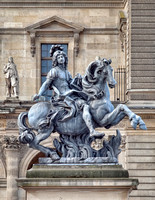 Jim walking toward the entrance to the Louvre. The long line of people on the right are waiting to buy tickets while those of us who purchased a Paris Museum Pass were able to walk right in. 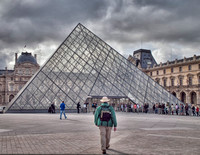 Jim on right with hat hanging on his back, in one of the galleries of the Louvre. The building itself is a stunning work of art! 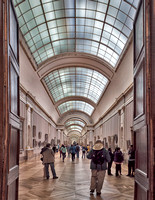 Leonardo da Vinci's Mona Lisa, a rather small painting, behind protective glass, surrounded by hordes of tourists in the Louvre. 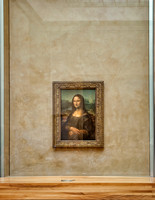 The Raft of the Medusa by the French Romantic painter and lithographer Théodore Géricault. 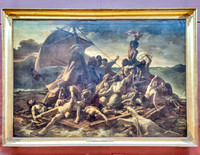 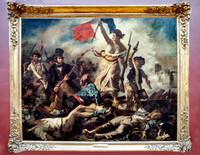 One of the many ornate ceilings in the Louvre.

Napoleon on the Battlefield of Eylau. 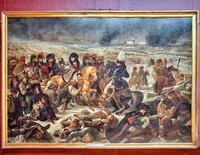 Consecration of the Emperor Napoleon I and Coronation of the Empress Josephine in Notre Dame, Paris, painted by Jacques-Louis David (completed 1808).

Abduction of the Sabine Women by Cardinal Luigi Omodei. 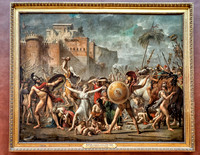 Ornate doorway in the Louvre giving an idea of the crowds of people, every room was packed. 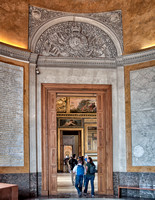 The Fall of Icarus ceiling fresco by Blondel in the Louvre. 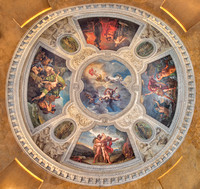 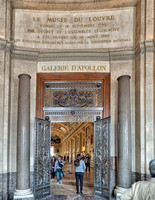 Panorama of the wall and ceiling of the Galerie d'Apollon (Apollo Gallery).

Man formed by Prometheus by Jean-Simon Berthélémy on the ceiling of the apartments of Anne of Austria in the Louvre.

The Earth receiving from the emperors Hadrian and Justinian the codex of Roman law dictated by Nature, Justice and Wisdom by Charles Meynier in the Louvre.

Ornate fireplace in the apartments of Anne of Austria. 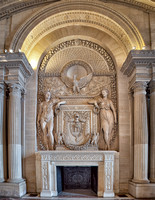 Hercules & Telephus a Roman copy of an earlier Greek work. 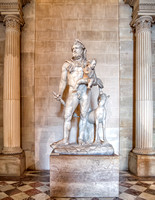 Ornate celing in the Louvre.